I can see Detroit!

Hey y'all, I'm back in the grand ol' U.S. of A!  Back from where they dip beavers wearing toques in maple syrup before calling on the Mounties to round up the polar bears... or something like that.

After a loud shaky flight from Toronto, I arrived in Windsor and could literally see Detroit across the river. My local volunteer caddy for the week's CN Women's Canadian Tour event was nice enough to pick me up from the airport. We went to lunch at Swiss Chalet... helloooo yummy chicken everything! Not focused on fried chicken like KFC, it had tons of dishes that combined the delicious bird in pastas, salads, soups, and the French Canadian version of chili cheese fries called "Poutin." I mean, when in Canada, do like Canadians... right?

I had a great practice round at Ambassador Golf Club and was glad to be working well with my local caddy. It was also fun to catch up with my former high school teammate from Oklahoma there competing. Heading into the 1st round I felt extremely determined to stay patient in the very windy conditions and commit to every shot before I hit. Knowing now again after the event near Montreal that telling myself to commit is NOT the same as doing it, I worked hard to literally clear my mind, look at the target, feel committed, and let athleticism take over to hit the shot. By doing that process much more successfully and staying patient I finished the round at Even Par. Yes, I did stop the 1st round self-sabotage pattern! I was especially proud of how I managed my feelings of frustration when I got to the 17th tee. After making back to back bogies on #15 and #16, I refused to succumb to having a round-killing finish in the wind. I took a few deep breaths, making myself feel calm and in the present, on the way to making back to back birdies on #17 and #18. Every round can always be lower, but it was a great feeling to know that I stuck to my plan, kept it simple, and managed my emotions to be more consistent. Still in the hunt entering the final round, I was ready to take it low and challenge the top of the leader board. I made a few "boondoggle" swings, and didn't get all the putts to fall, but finishing at even par again placed me 12th overall at the end of the tournament. It felt great to rebound from the event near Montreal and apply what I learned in my process. "Hey Brooke, guess what? Par is STILL your friend!" I bet it always will be.

Time to practice before stamping my passport again for the Women's Canadian PGA Championship! 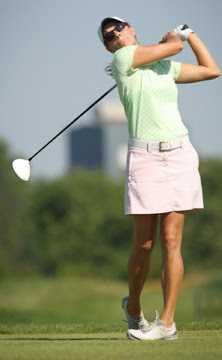 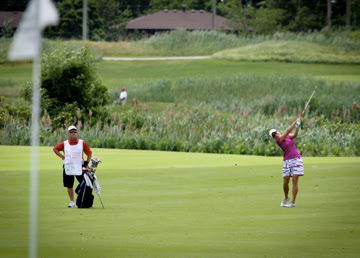 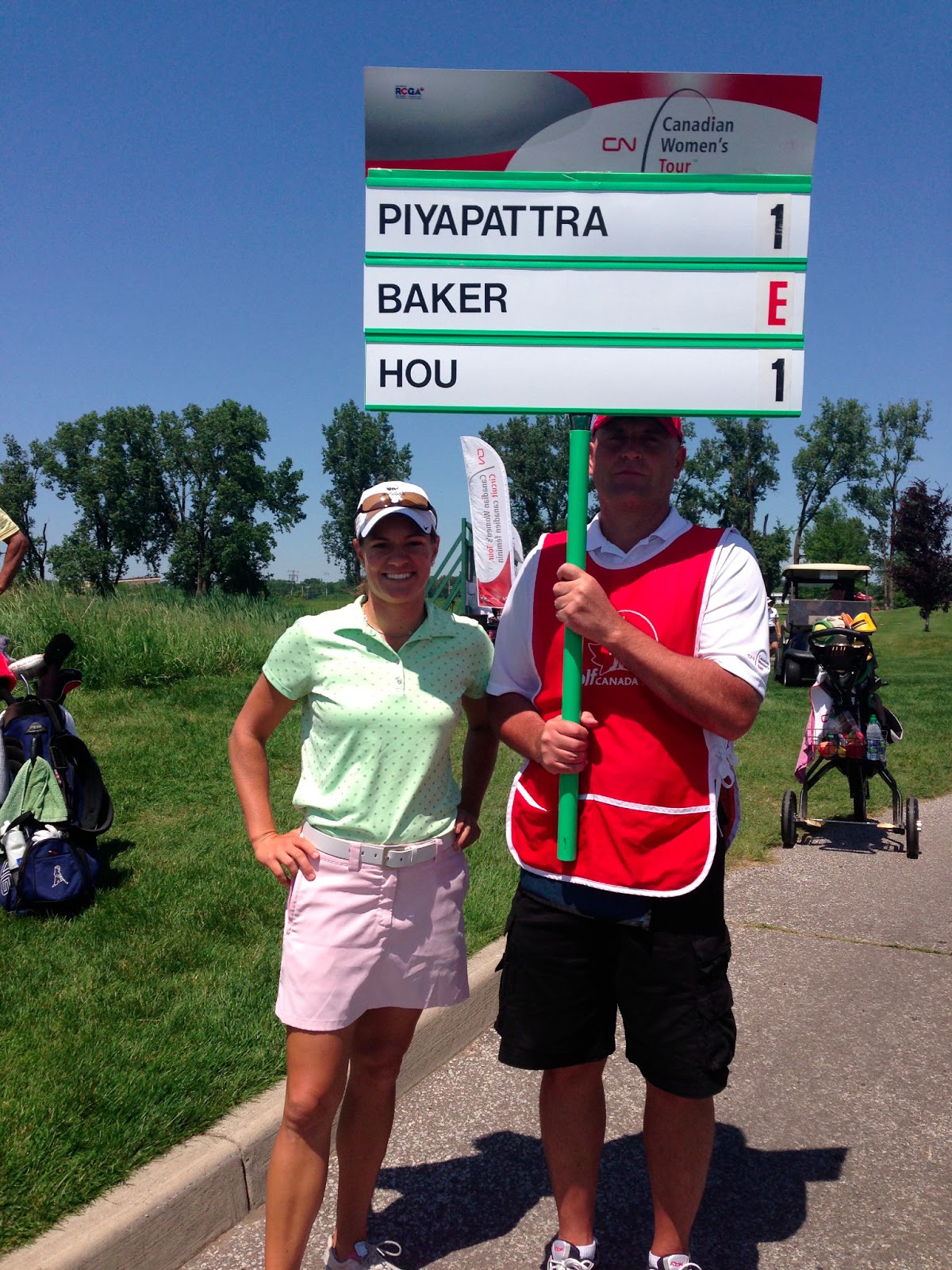 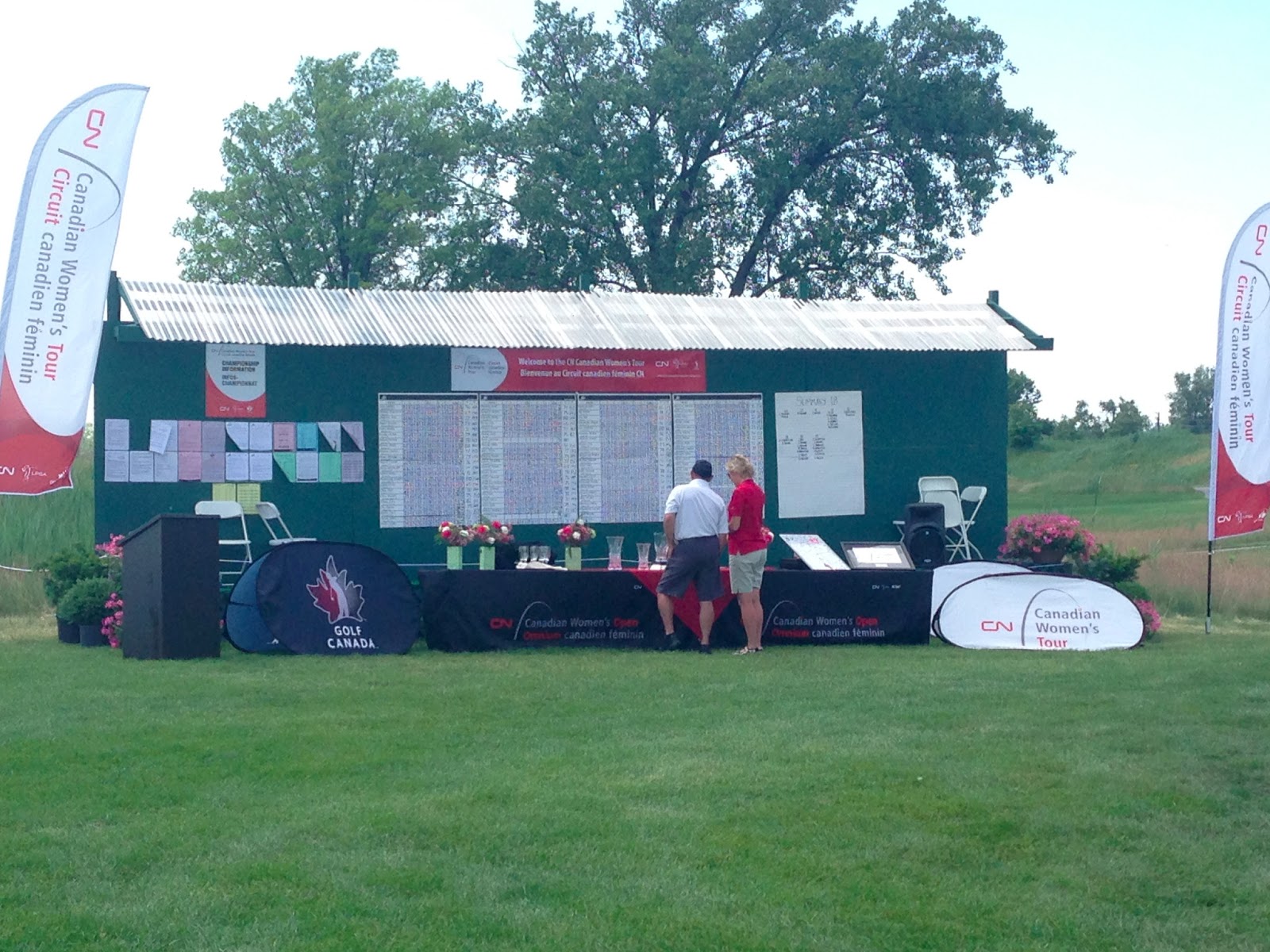 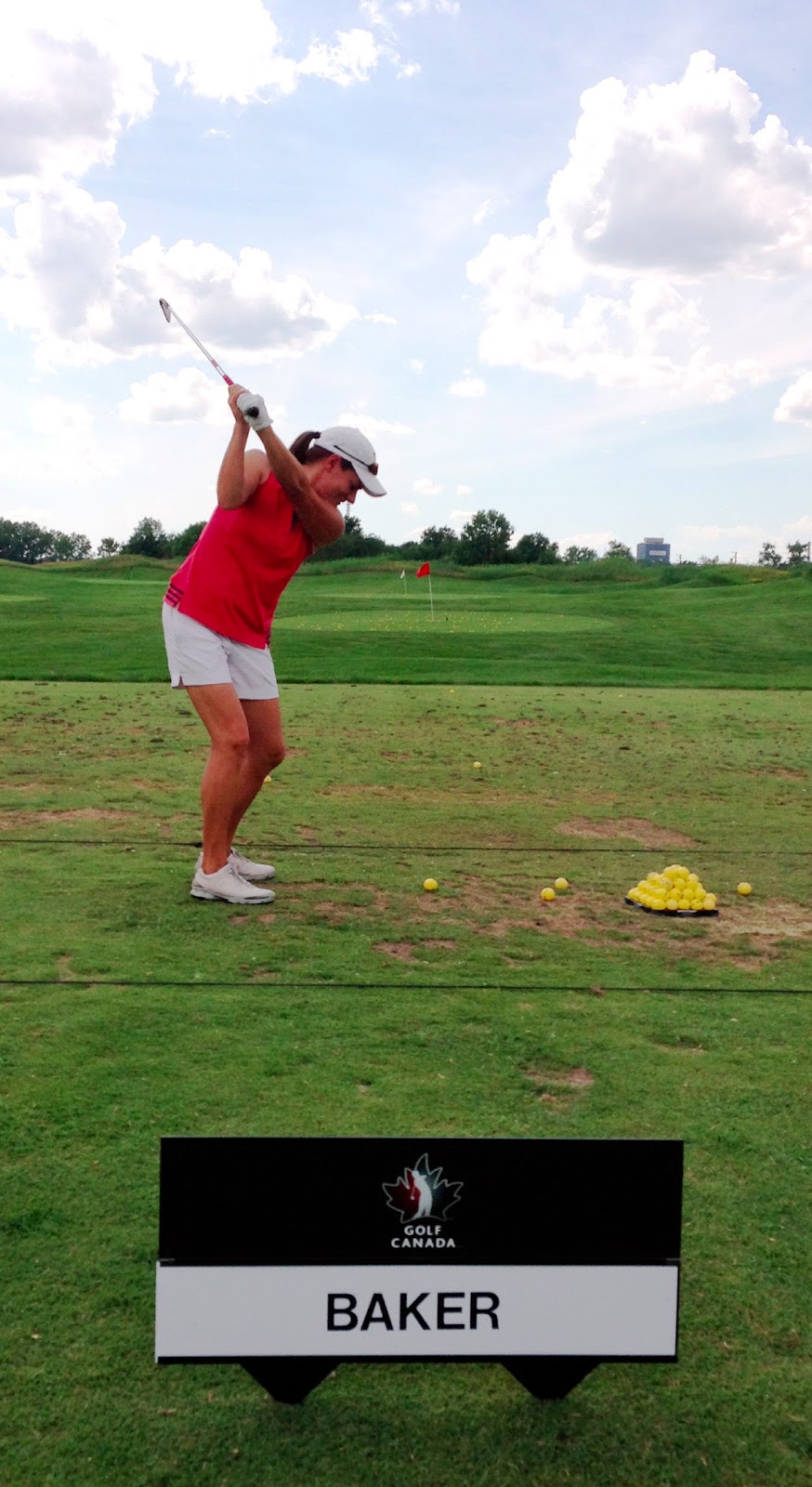 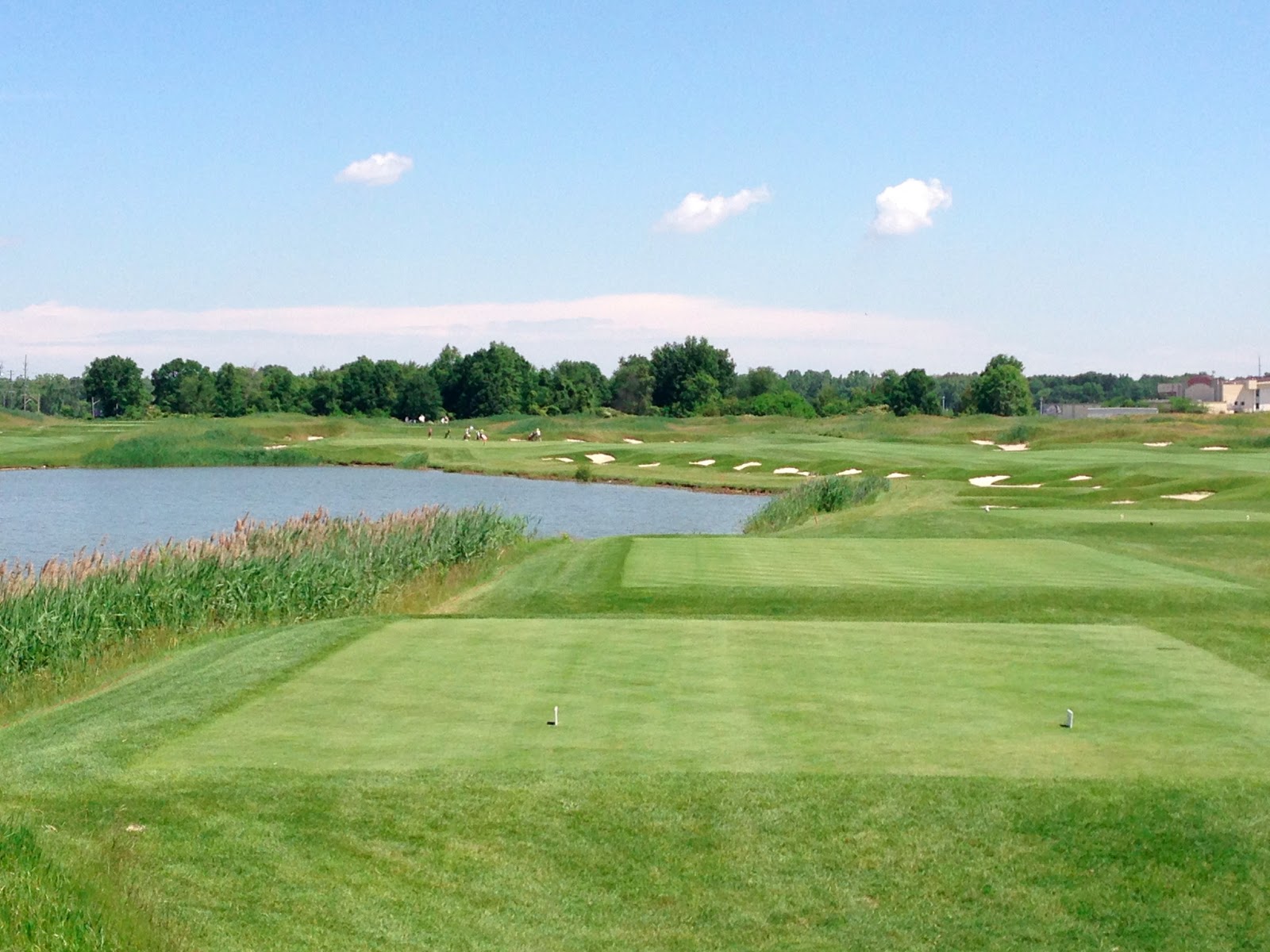 Flying over the Caribbean? Or Lake St. Clair near Windsor? 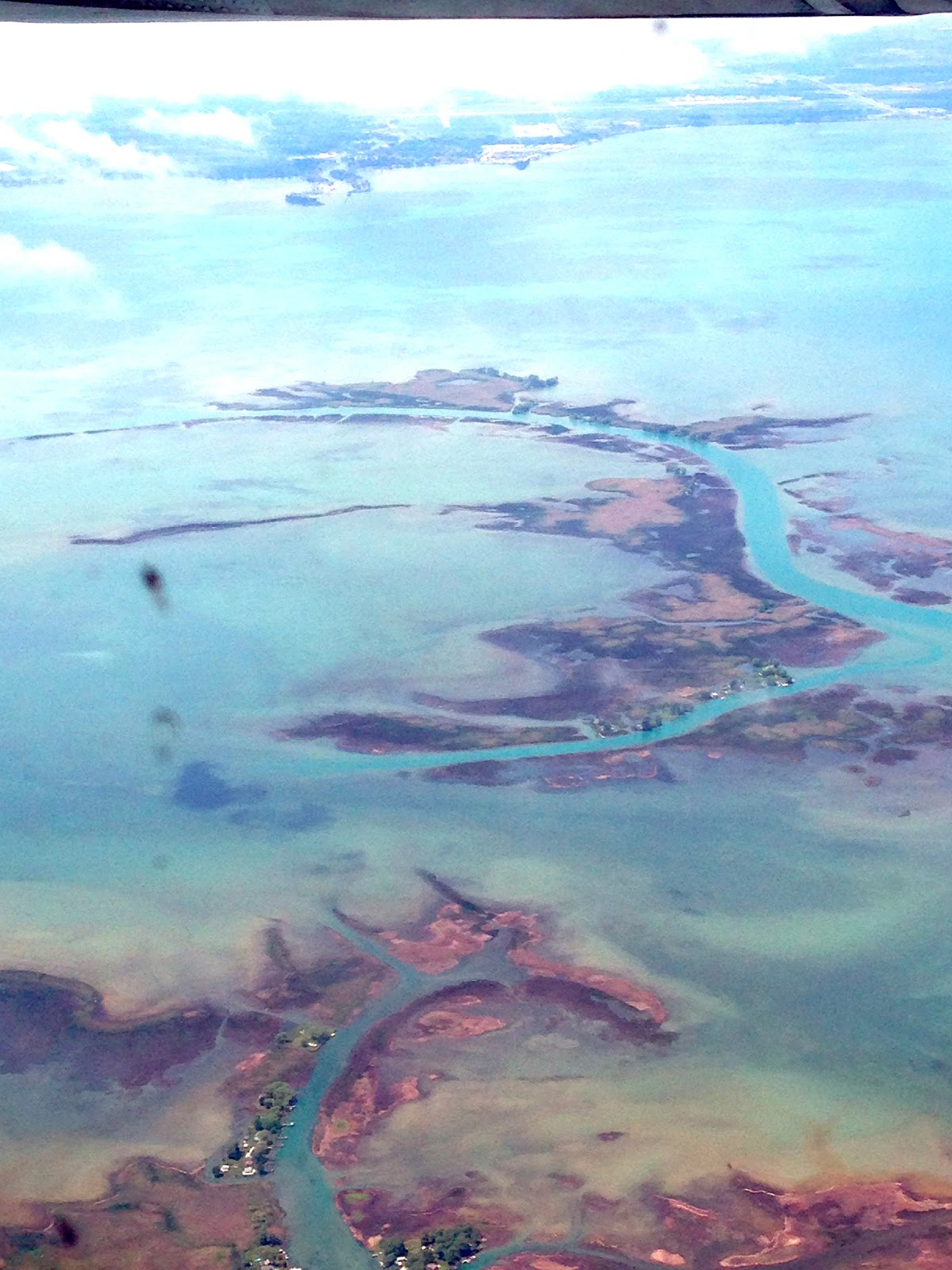 Worst part about Canada? They don't have ESPN anywhere on "U.S. Open/ NC State vs UNC College World Series" Sunday evening, so you have someone videochat broadcast the baseball game to you! 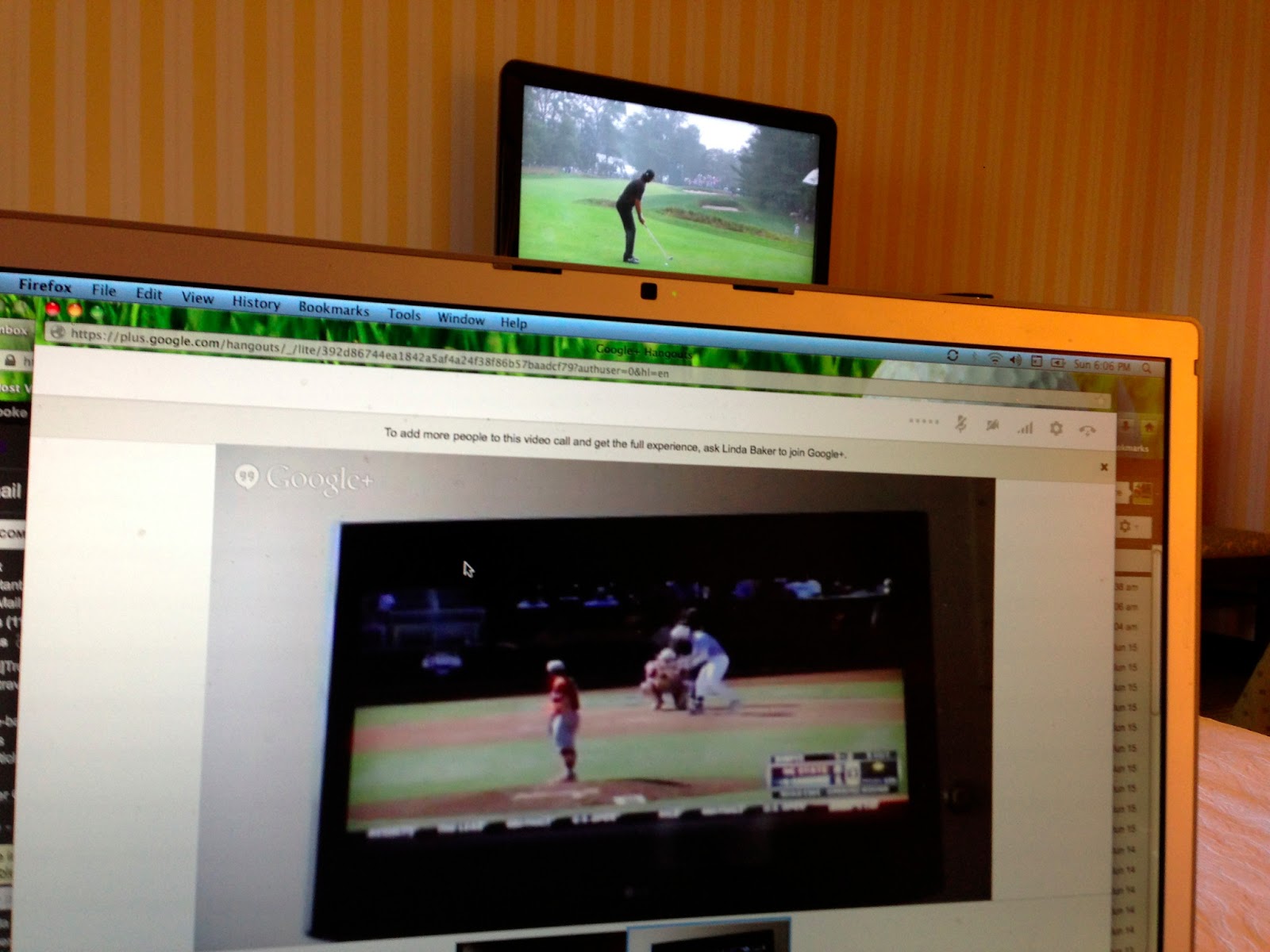 Oh yeah, when you're in Canada, expect hockey pucks for paperweights. 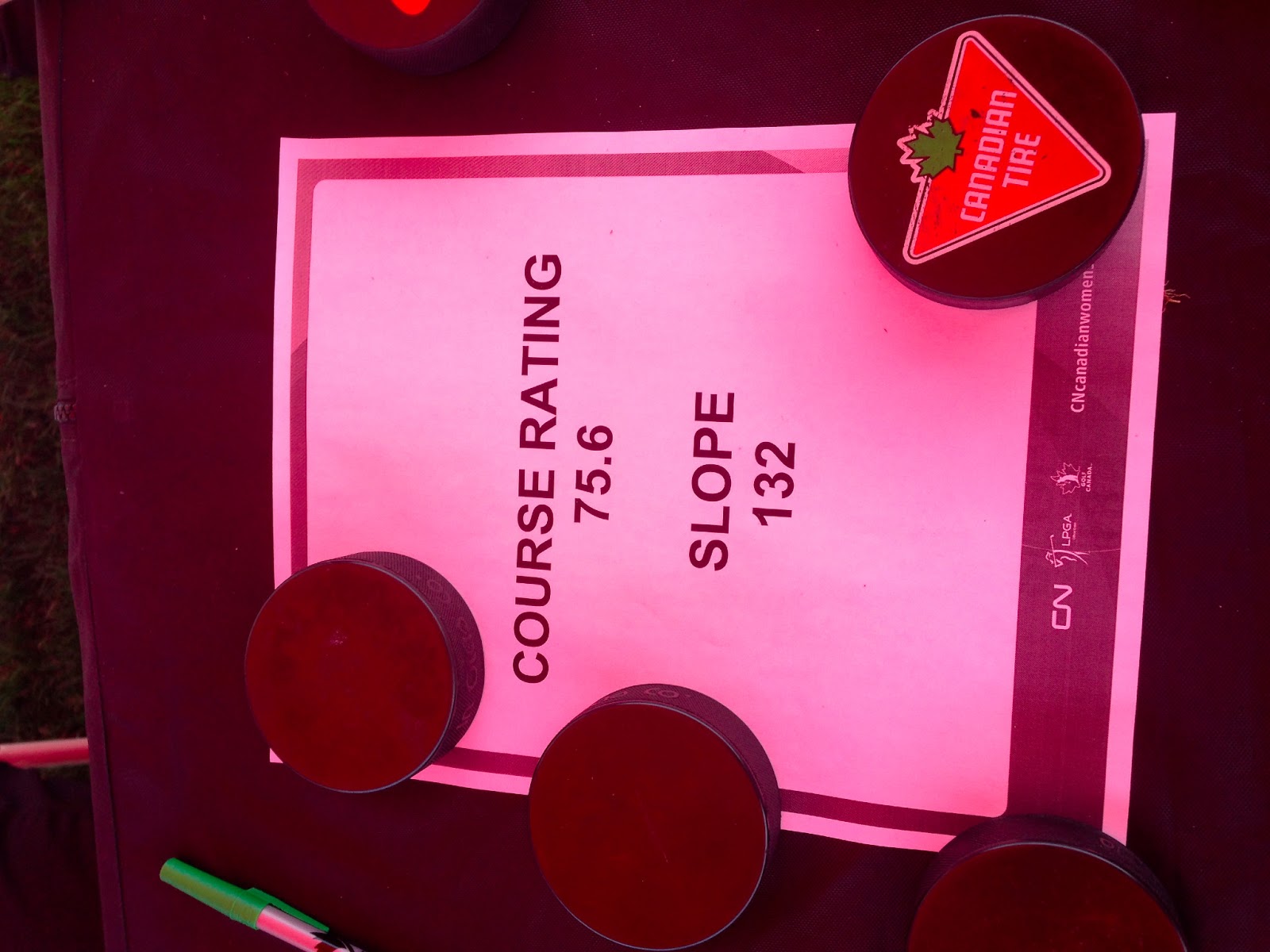 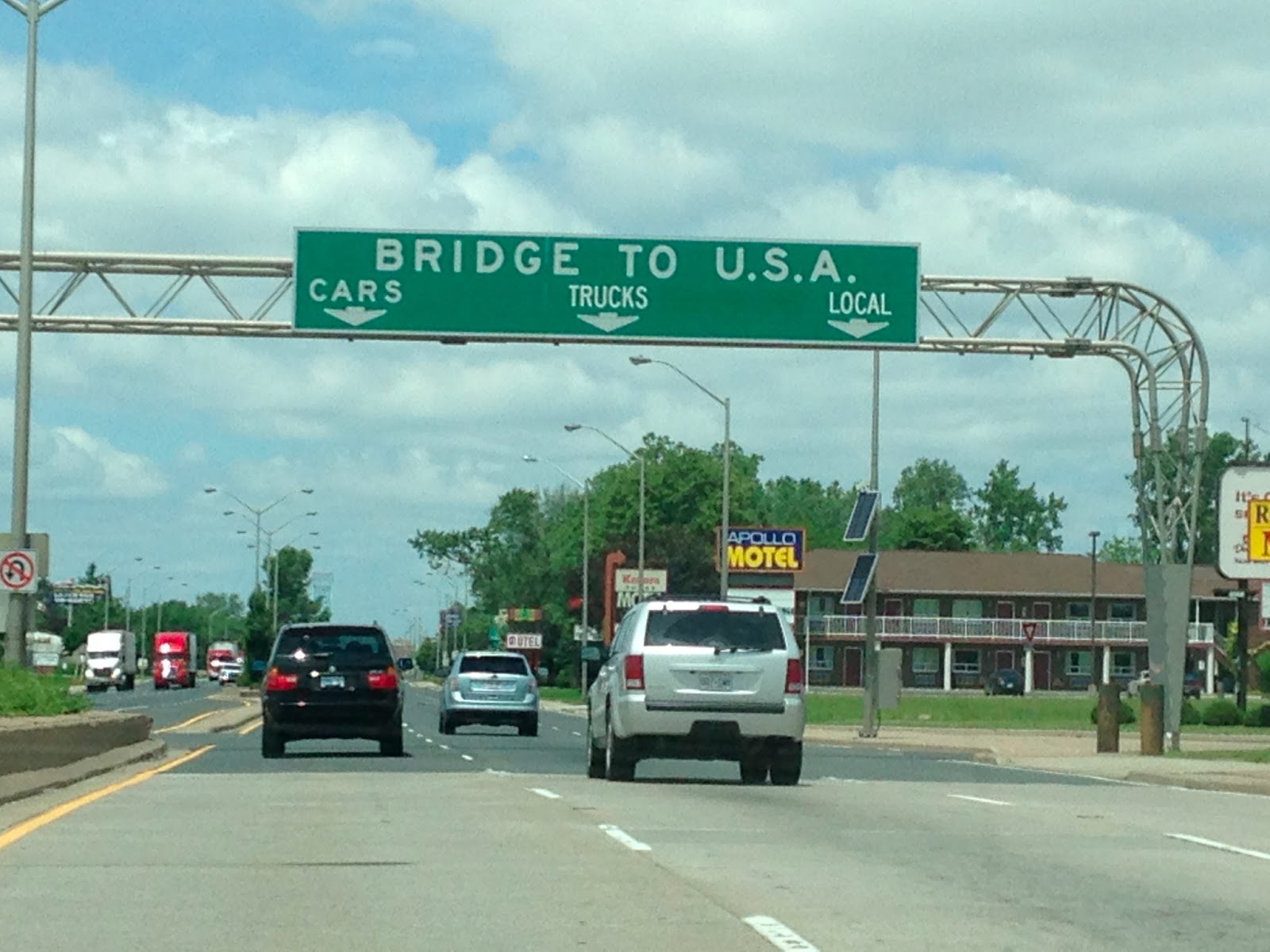 Get out the passport, there's Detroit! 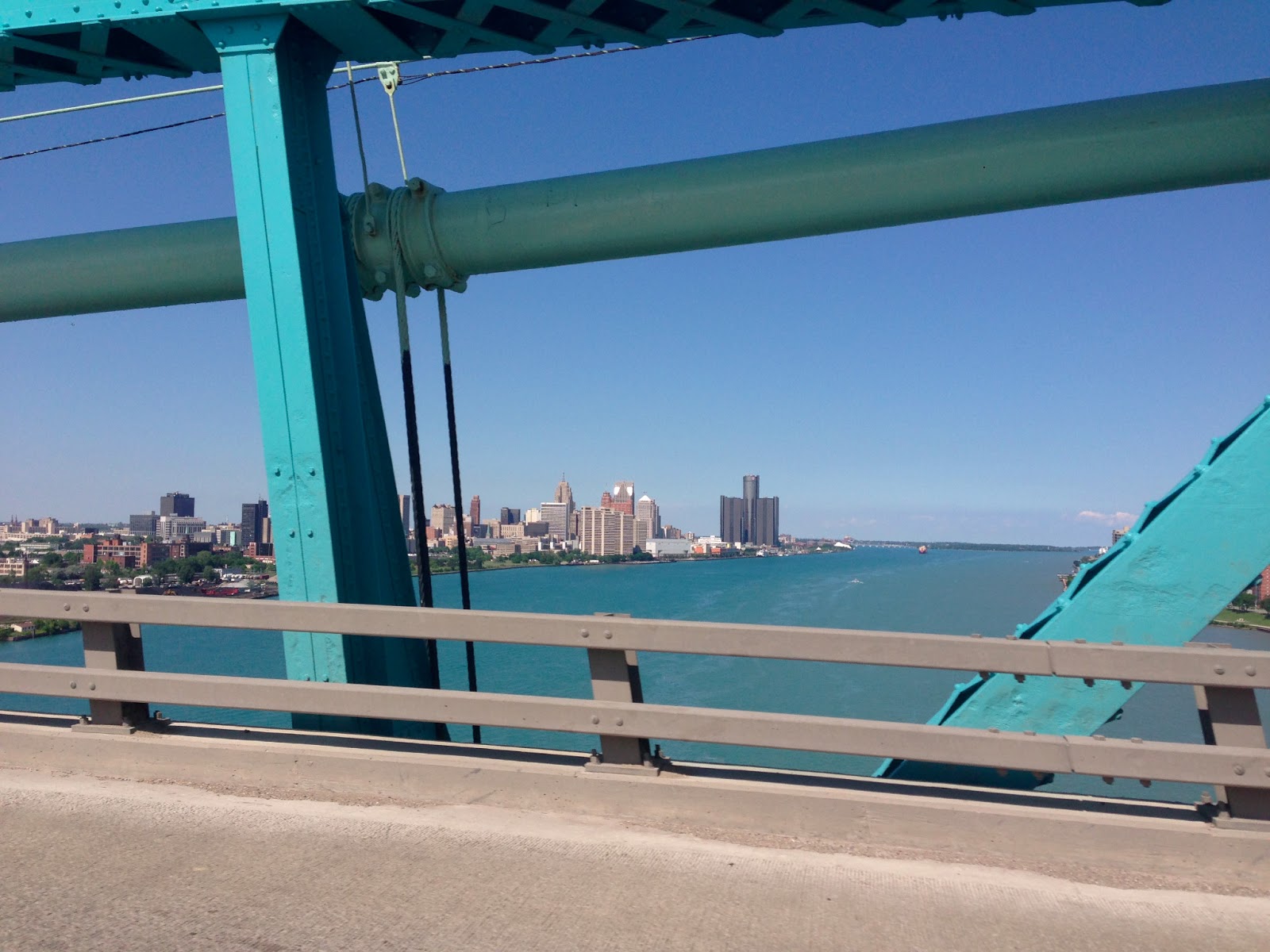 10 minutes before I was asked to pull over for a random search and minor interrogation before crossing back into the States. 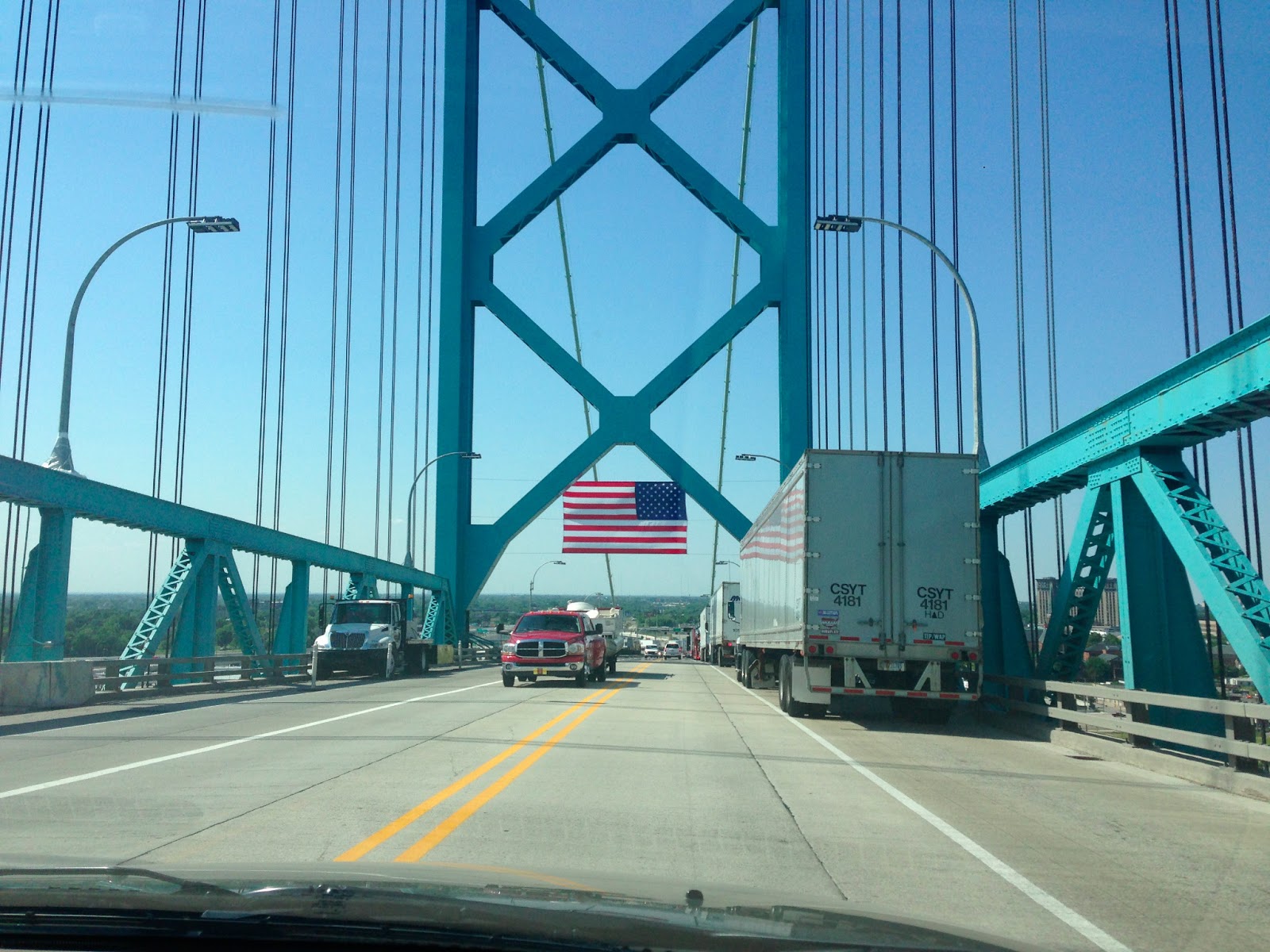 Following the conclusion of the CN Canadian Women's Tour event outside Montreal, I drove back to the airport and flew to Toronto to spend the weekend with friends. I really enjoyed playing Toronto Golf Club with them and getting in some good practice between tournaments; what a treat! I had never been to Toronto before but I liked it! It is a very clean and pretty place, but like all major cities it definitely has its traffic problems, so make sure you leave early enough to make your tee time! I remember the first time I was in Heathrow Airport in London. I felt tiny in the massive terminals and that's also how Toronto's main airport made me feel. I appreciated the friends' hospitality and had fun meeting some of their friends as well. I even tried a new South Carolina themed drink called Boot Scootin' Bourbon, which was still tasty up here North of the border. Practicing and recharging between tournaments while visiting familiar faces is invaluable when traveling to multiple events in a row... And who doesn't love great food, awesome company, and a big fun sailor dog named Monty? I can't wait until I can come back to check out more of this cool busy city!

Off to catch my tiny propeller-plane to the next event Windsor, Ontario! 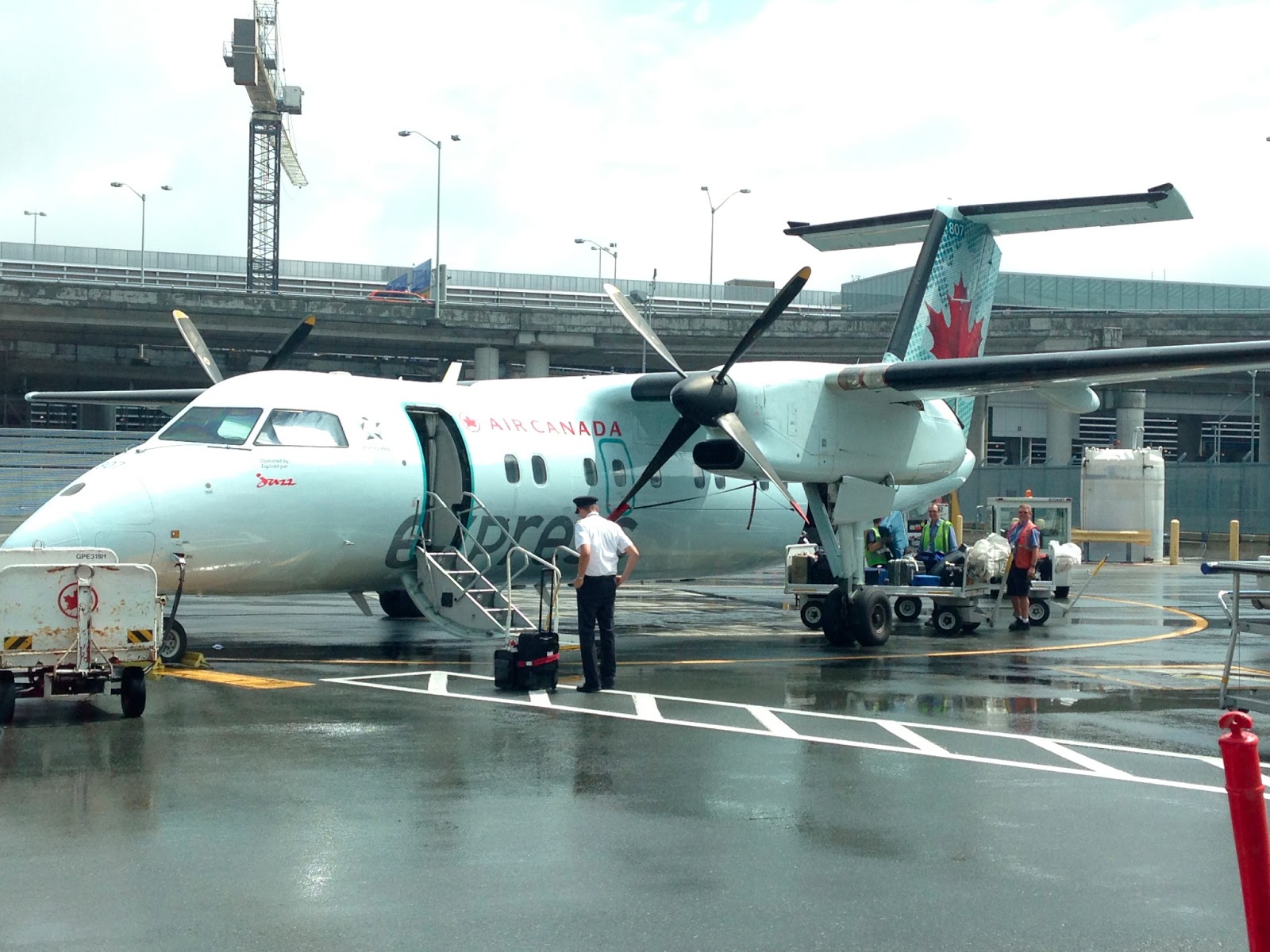 Posted by Brooke at 5:03 PM No comments:

Bonjour! So in my first trip to the Great White North, I flew into Montreal and expected it to feel like the Northern U.S. but maybe hear a little French. Well, when you play a course out in the country 90 minutes Southeast of Montreal, you hear a LOT of French. It wasn't always the case but I was surprised to walk in a couple small restaurants and find that only 1 person spoke English in the establishment. There were a few good laughs when I replied, "gracias", without hesitating to a gentlemen holding the door for me. Apparently when I'm in a place where I know English is not the main language, I automatically switch to my 2nd language, Spanish. Haha  Anyway, as for the golf...

It rained a lot! Surprise, I know. (Note the sarcasm there for my 9 tourney trips in a row with dramatic rain). After 4 days of rain in a row there before I arrived, then a nice dry practice round, it started raining the night before the 1st round and did not stop until after I was done playing. I was actually excited to play in it since I'm used to playing in so much rain now and thought the conditions were to my advantage. However, I unfortunately did a poor job of managing my frustrations during the soaking rain. One thing they did that I had never seen before was grounds maintenance crewmen squeegeeing greens between groups while we were playing. Although finding relief from standing water and casual water was difficult, I kept telling myself to stay patient. After the round, I realized "thinking" and "doing" are two different things. I managed my game decently in the first 9 holes, and actually got up & down for par 6 holes in a row. However, when I finally hit a green in regulation on #12 and then aggressively three putted from not feeling the changing wet speed of the greens outside 5 feet in 7 holes' time, I let my frustration consume me. I would let it go to hit a good tee shot, but then while telling myself to commit to the next shot I actually began to expect the same kind of missed approach shot. I bogied several of the closing holes and left myself somewhat behind the eight-ball heading into the final round. In the 2nd/Final round, I was poised for a comeback in my first 9 holes, making sure I stayed committed to my targets and in the moment on every shot. I sadly fell victim to results-oriented thinking again with 5 holes left in the round, and put too much pressure on myself to make birdies. Yep, you guessed it, I closed with a few bogies that caused me to finish in the bottom of the money list for the tournament.

I really learned a lot from the experience of managing my mental process and emotions in those incredibly soggy rounds. The golf course was a great design that I enjoyed, and I left knowing that I had to make staying patient, and thinking of nothing but committing to my target before every shot, my main focus upon which to improve before the next event. Next time I'm in Quebec, put your betting money on me keeping my emotional energy consistent in how I approach every hole that I play. "Brooke, par is always a good score!!!!" 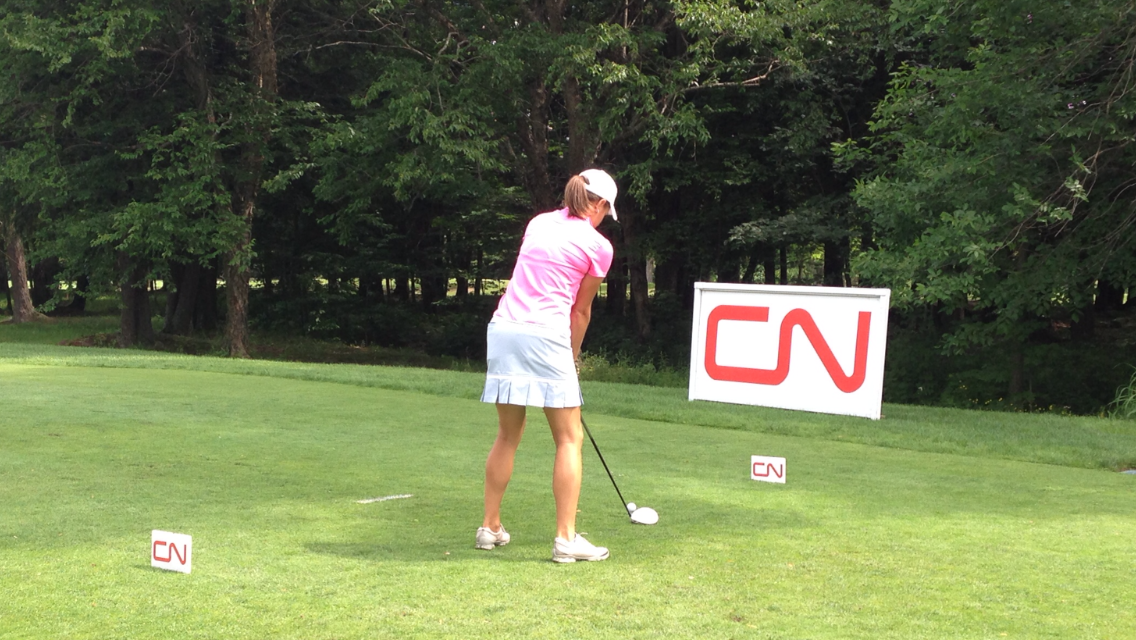 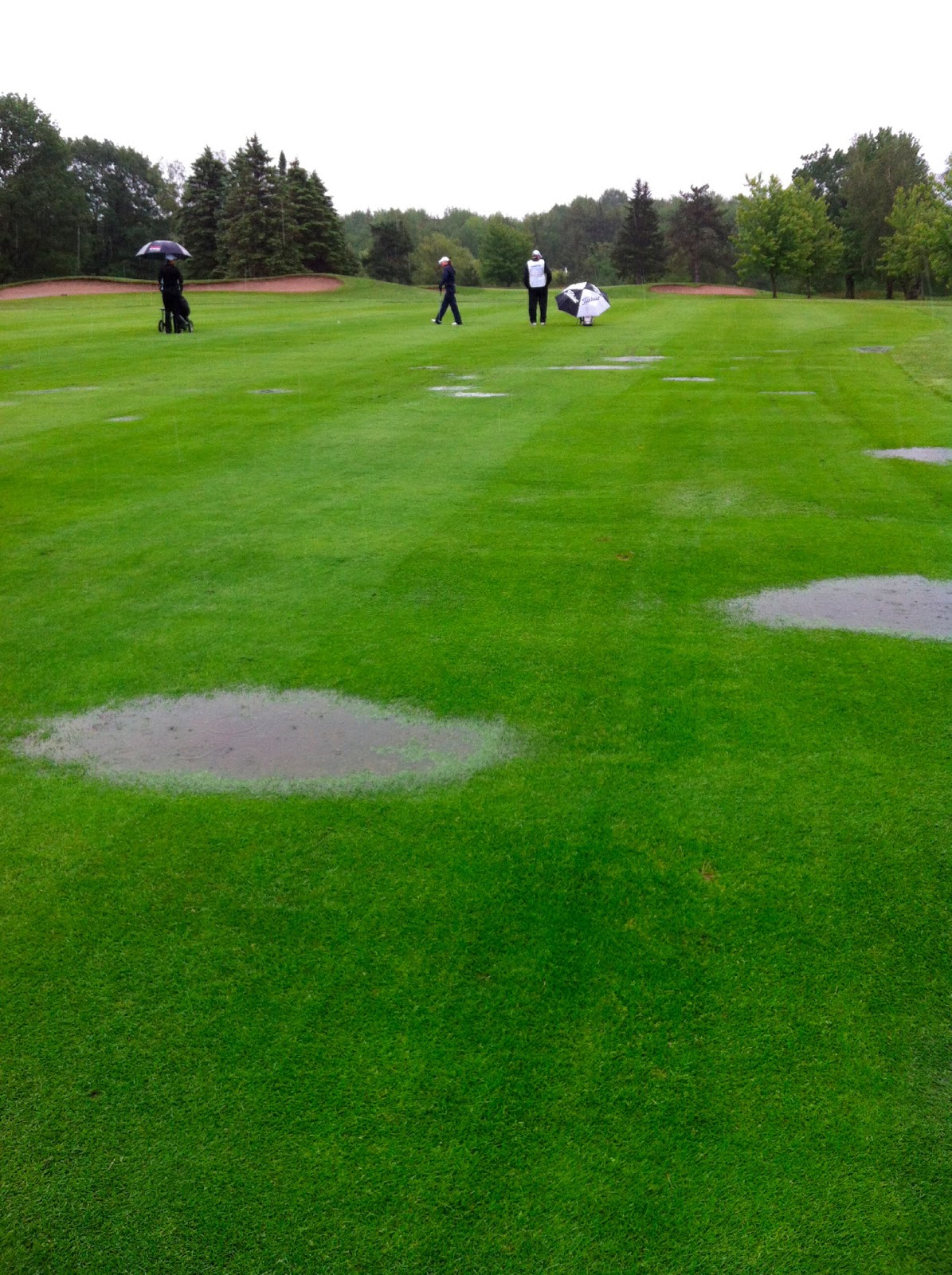 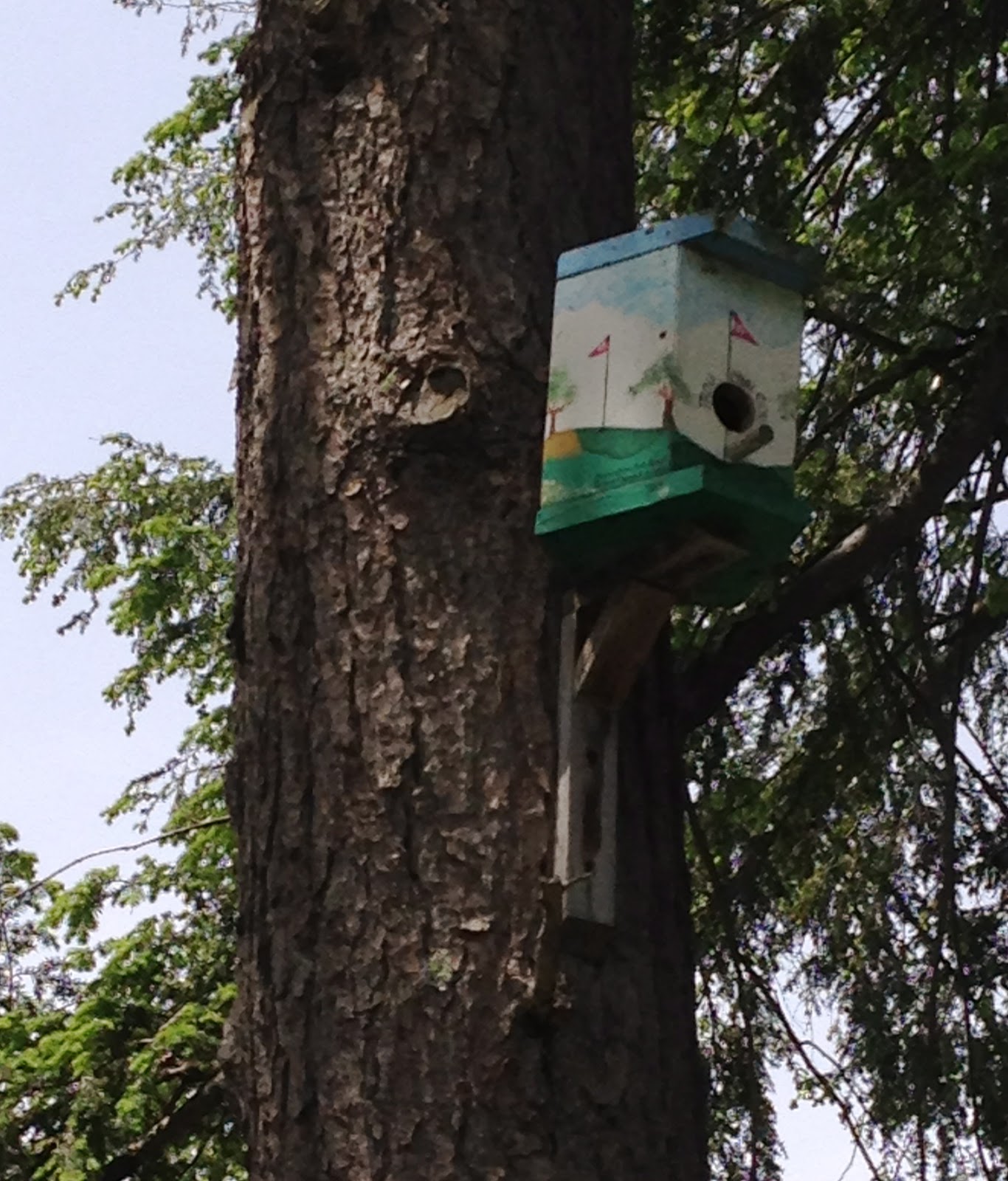 How to practice "trashy" pitches after your practice round, knowing it will be soggy the next day.... 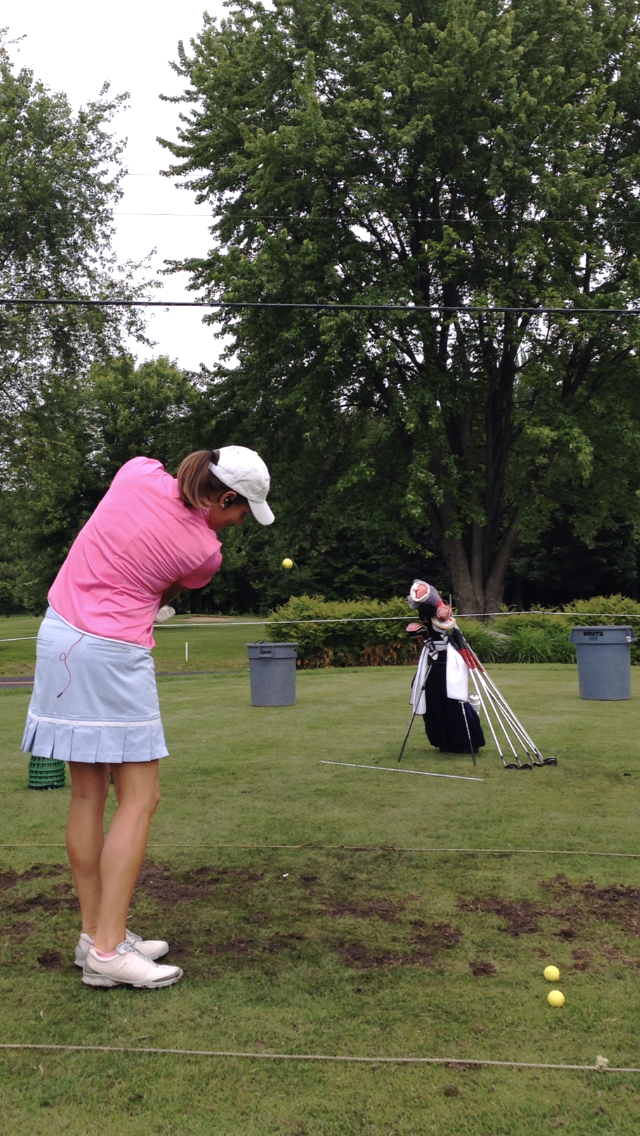 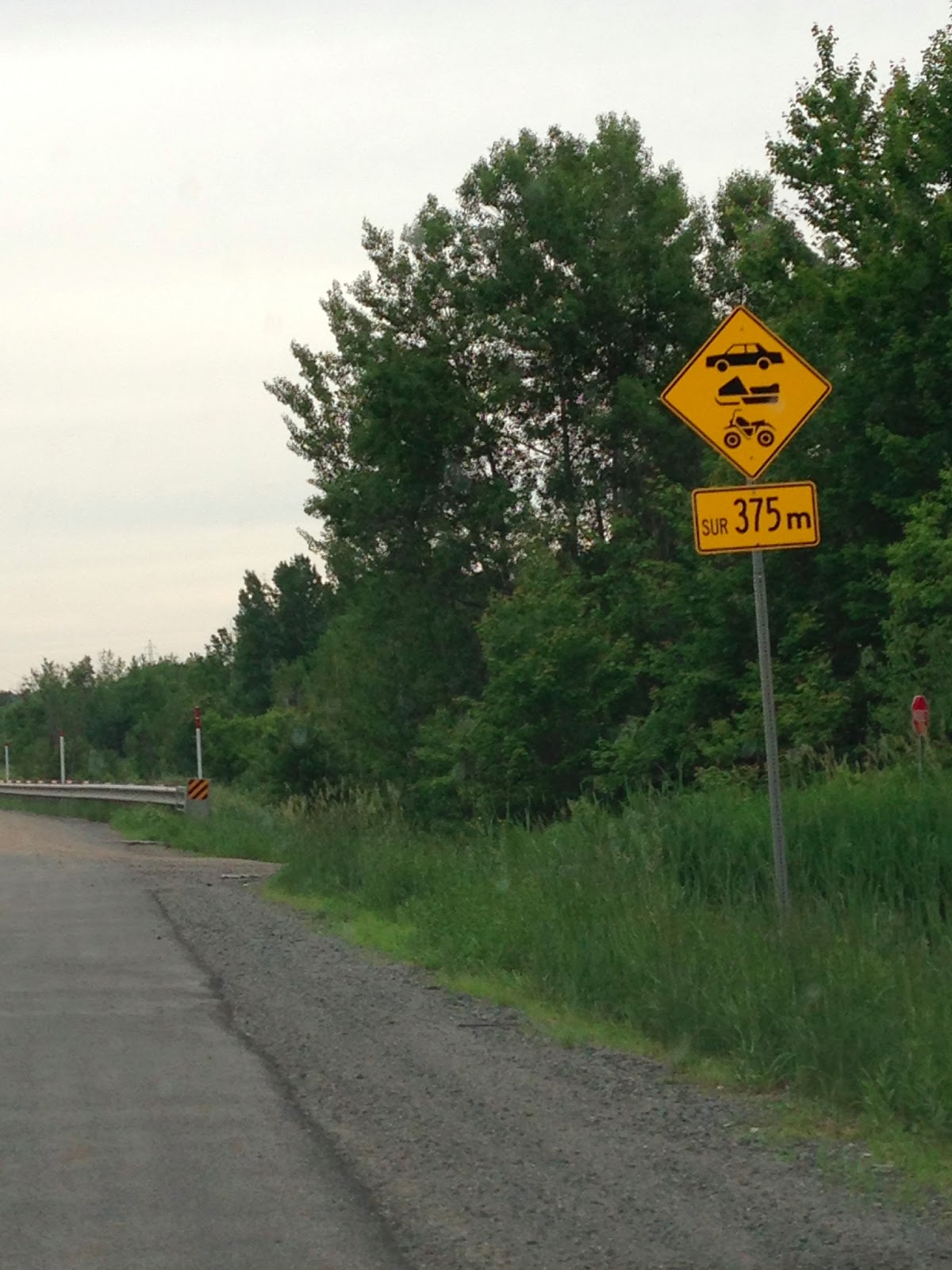 On the way to the course through the country back-roads...Mini llamas/alpacas shaved so it looks like they're wearing UGG Boots! Absolutely hilarious, precious, weird, and epic all together!!! :) 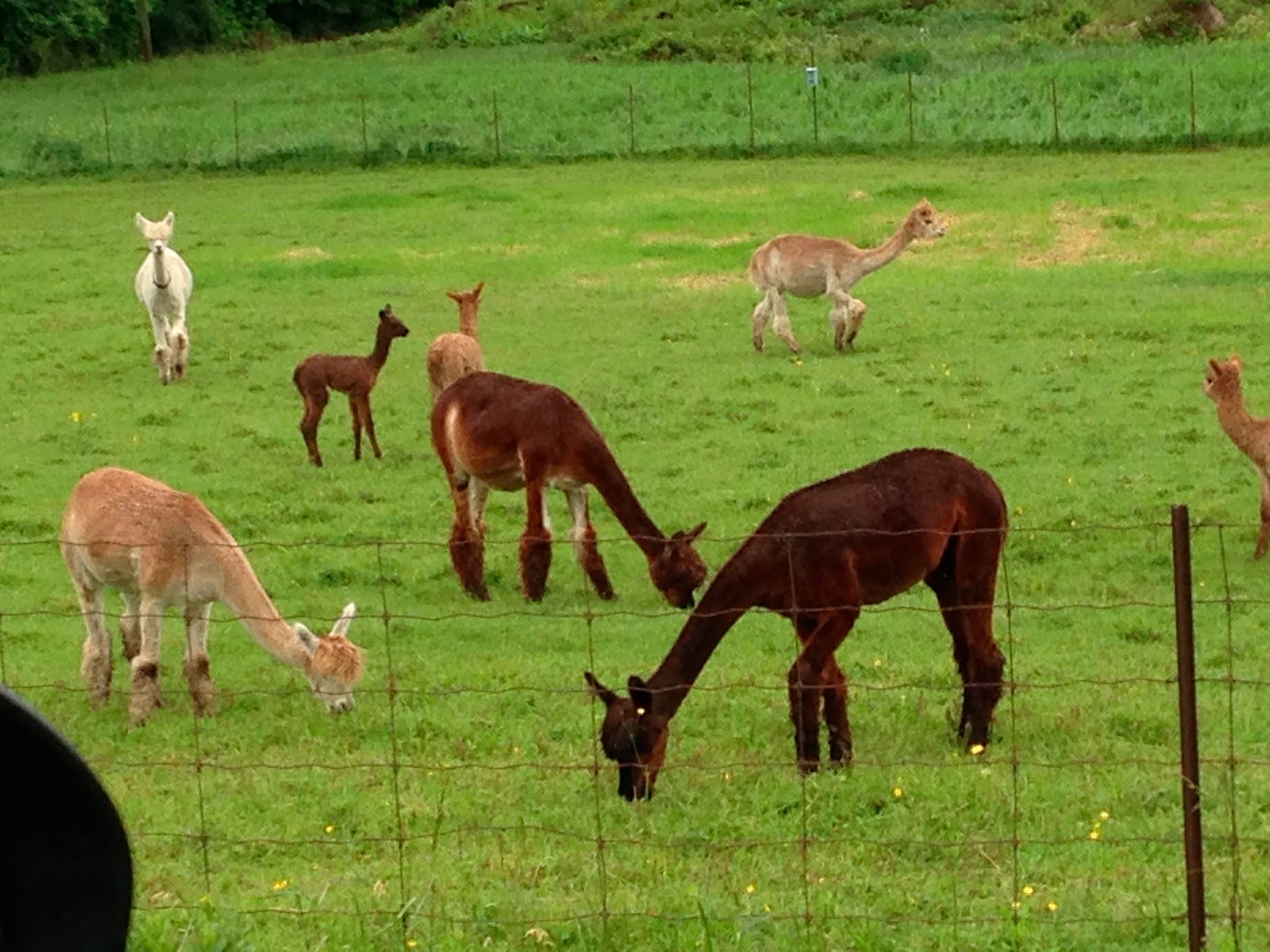 Posted by Brooke at 4:15 PM No comments:

I got back from the Women's Connecticut Open a few days ago and I'm enjoying a nice week of practice now before heading to Canada for my next events. The trip to CT was fun because I got to visit a lot of cousins that I had not seen in over a decade, and I was especially impressed that even my great uncles came out to walk the course and cheer for me! It was also a great tournament, as I finished 4th overall and 2nd in the Pro division to finally cash my first solid check as a new professional golfer.

I wasn't very pleased with my mental game in the first round, hitting many of the same types of misses because it was almost as if I expected them to happen. Though I tried to let go of any anxiety in a swing thought, I remained somewhat frustrated throughout that round, salvaging par from very thick rough. I realized later that night that I probably rushed too much when I started feeling frustrated on the course. Actually, I think I spent too much time making decisions, and then rushed through my pre-shot routine too quickly. The next day I arrived at the course with one single mission; to remain more calm or consistent in the rhythm of my pre-shot routine. I did not want to play any slower, but rather trust my instincts more in making quicker decisions, and then feel calmer while walking into the shot. Thankfully, that difference helped tremendously and immediately improved my ball striking. I was -3 under par at the turn, and although I had a few hiccups on the back nine I was proud of myself for staying in the hunt. I left CT feeling very encouraged and glad that I learned the importance of keeping a consistent pace in my pre-shot process. Next on the tournament schedule is a Canadian Women's Tour event near Montreal, then another in Windsor, right across the border from Detroit. I can't wait to tee it up again!

Have a great week! 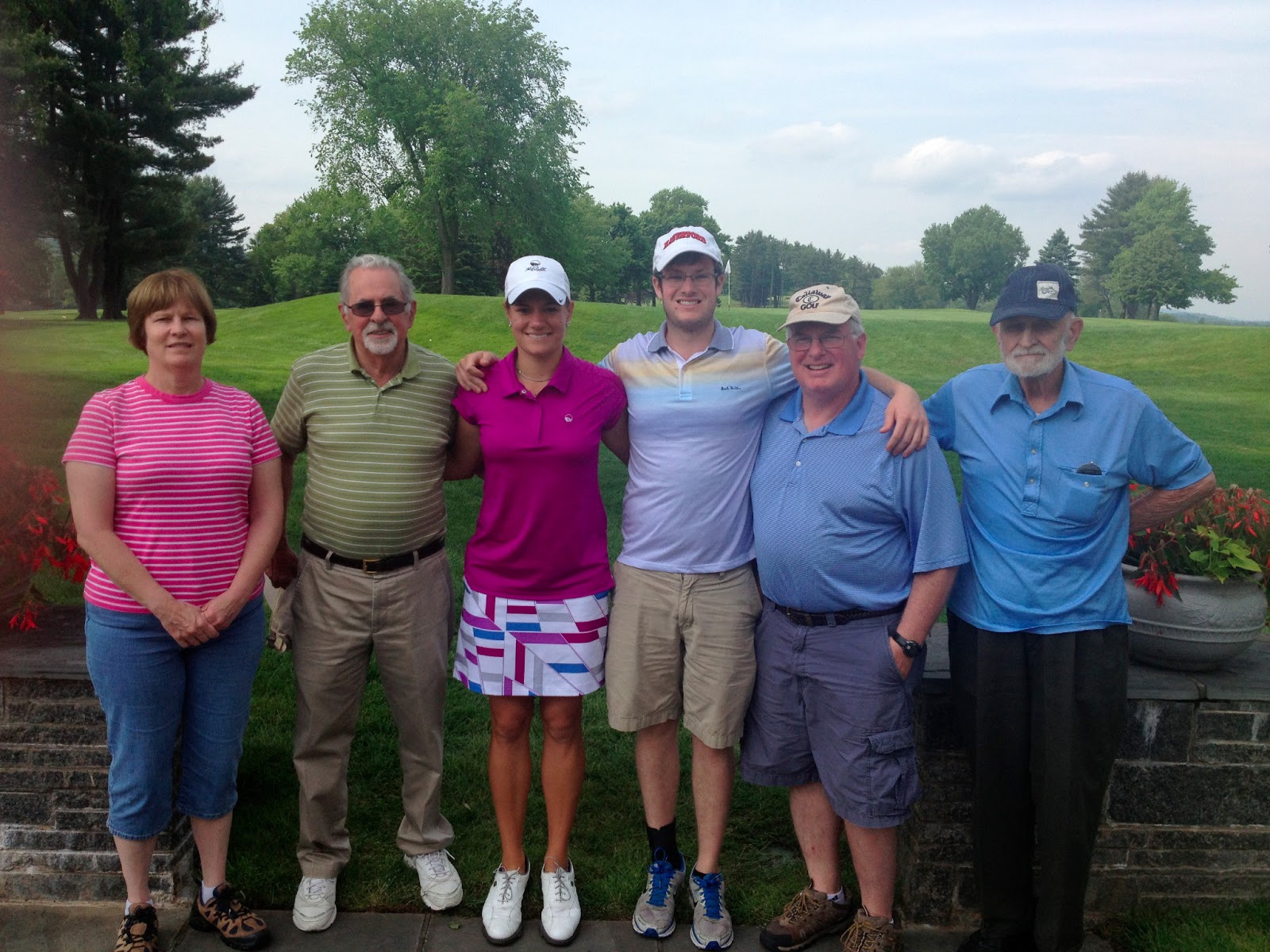 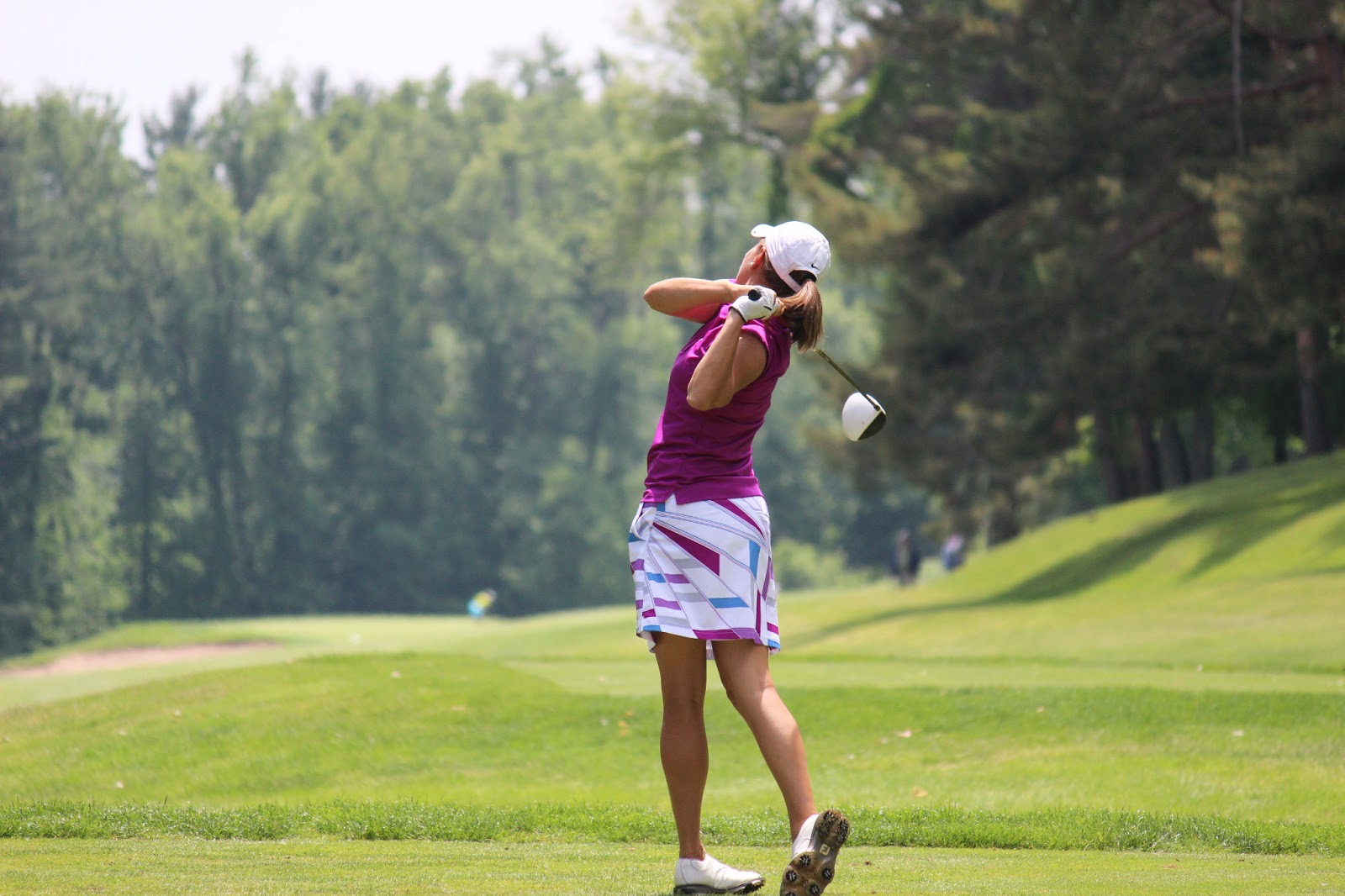 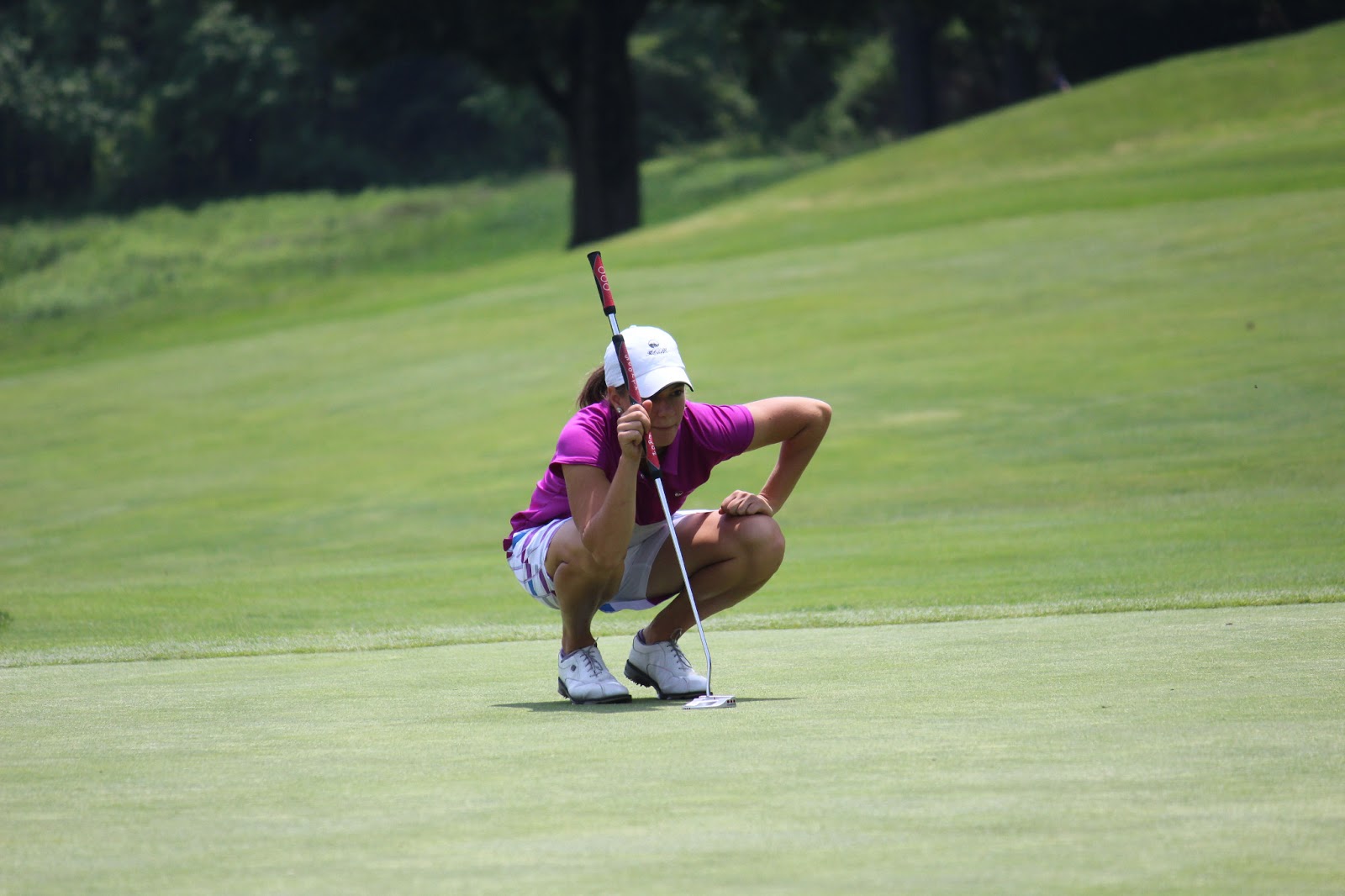 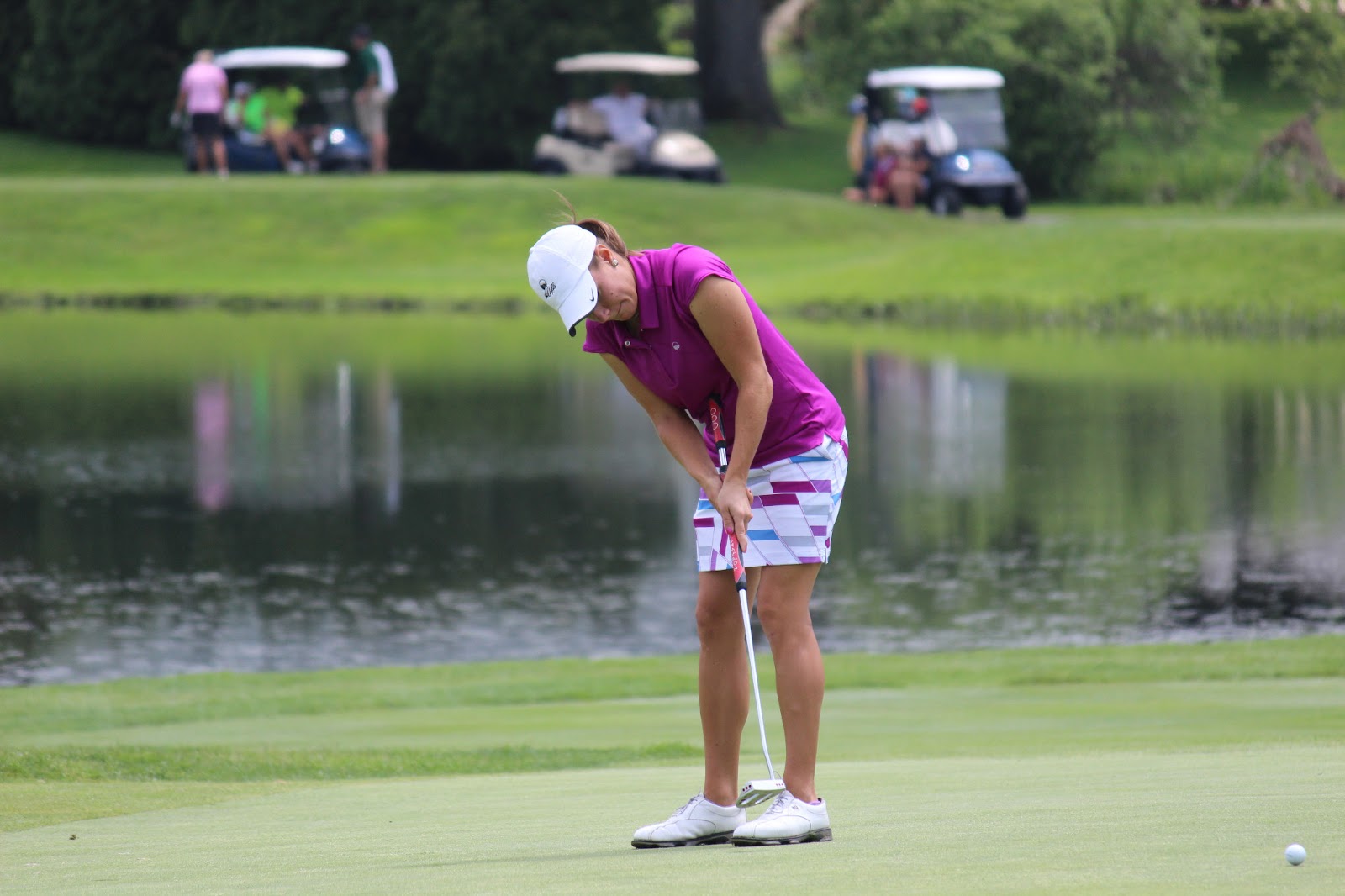 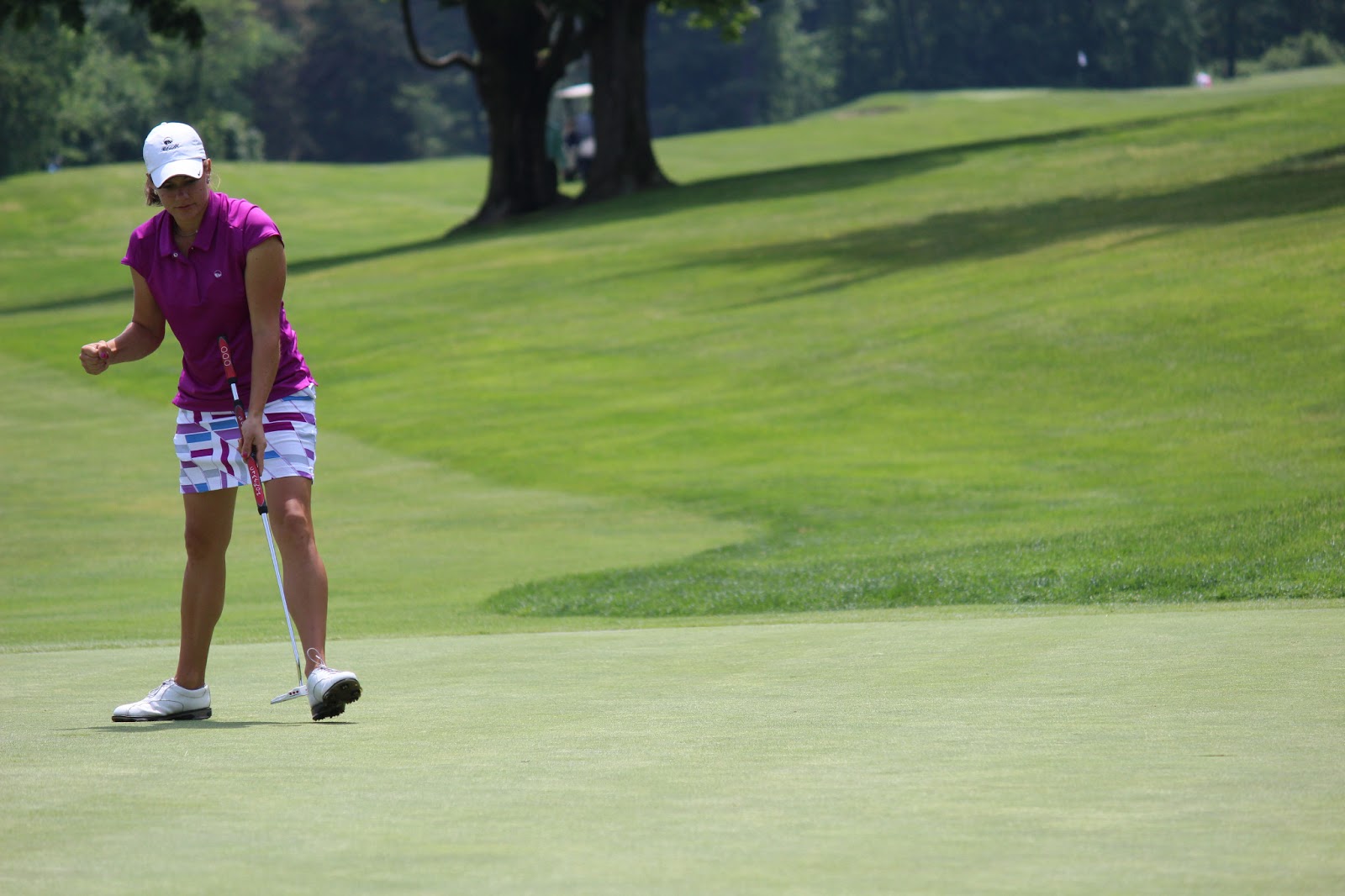 Posted by Brooke at 4:50 AM No comments: